One of the most adapted literary characters of all time is Count Dracula. Played as a romantic anti-hero, a demented monster, and an empathetic but misguided devil, audiences cannot get enough of Bram Stoker’s creation. It is not difficult to fathom the reason why, for beneath the interesting tale of heroism pitted against an ancient and overwhelming evil runs a gamut of symbolism that never fails to connect with the audience. Teeming with lurid and shocking revelations, along with seductive characters and temptations, Dracula embodies all we know to be evil but cannot resist.

The central character in over two hundred films, plays, ballets, operas, and musicals, Dracula was not the first vampire to appear in Victorian literature (that honor belongs to Lord Ruthven in The Vampyre, in 1819) but certainly the most infamous. Dracula does not appear often in the book. The story is told from the perspective of the protagonists, who conspire to destroy him before his corruption of Mina is complete.

Woven throughout the novel is a strong message about perversion and godlessness contributing to the downfall of the individual as well as society. It is apparent in the villain, whose very existence defies the nature of man’s mortality and stands in defiance of the Creator. Dracula survives off the blood of mortals and corrupts those who fall under his influence. His presence and continued sharing of blood alters his victims into seductive temptresses. No more startling depiction of this is when Dracula offers his brides an infant for sustenance and Jonathan sees them fall upon it with voracious bloodlust.

The novel also emphasizes the importance of faith and a general understanding of supernatural forces. Jonathan at first scorns these influences but comes to realize their value when Van Helsing employs a faith-based approach to defeat their foe. This is in direct contrast to the Darwin philosophies of the Victorian era and underlines a belief that evil exists whether or not we believe in it, and without understanding it, society will be powerless to prevent it. The novel’s antichrist is Dracula, who fears no power apart from God, whose emblems and icons are often used to defeat him (crosses, holy wafers, and sunlight). Even blood is symbolic, a perversion of the Christian practice of communion, in which believers partake of the “body and blood” of Christ, who gives them eternal life. Considered one of the holiest practices in the Church, Dracula takes this sacred act and perverts it by drinking the blood not of Christ but of humans. Because they are sinful and fallen, it is impure and tainted, condemning him to a half-life, eternally separated from God. He has gained immortality at a terrible price.

Both sides of feminist ideals is another theme. We observe it in the carelessness with which the Brides treat the child they are given, brutally murdering it for their own benefit. Jonathan was transfixed by their “beauty” until this action revealed the horror of their souls. The influence of Dracula transforms more than one woman in the story, bringing out her base, sensual nature, but it is not a condemnation of liberation but godless feminism, addressing the author’s concerns that such sexual liberation would remove woman’s gentler nature. His heroine, Mina, is in fact a very “modern” woman, literate and intelligent, fully capable of assisting her companions and demonstrating great courage and fortitude in the face of danger.

Dracula preys on women not because they are the weaker sex, but because of his abhorrence for their ability to create “life.” If one continues with the religious symbolism, it was a woman who brought the savior into the world and so his animosity for the purity and innocence of women (a representation of the Virgin) is understandable. Dracula cannot create, only corrupt, and so he undertakes a unique and sinister role in creating (infecting) “his children” (God’s children). His behavior can be interpreted as a condemnation of a male-dominated society in which women are regarded in a purely maternal light (using them only for male gratification). 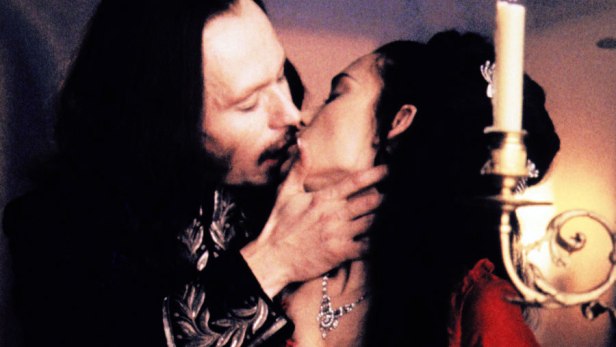 Throughout, Dracula plays the role of temptation, perversion, and debauchery, furthering the message that evil corrupts, making those who participate in it “unclean” and separated from God. Only through complete abandonment of such evil, by embracing truth and reinstating religion, is godliness restored. In destroying Dracula, Mina is released from his influence and returned to her natural pure and untainted state.

The motivations for Dracula’s choice to remain distant from God are unclear. A modernized version of the story suggested Dracula was Judas Iscariot, condemned to an immortal and eternal separation from God for the sin of betraying Christ. Another version depicted it as an act of resentment against God for the loss of a woman he loved. An actor depicting the Count on stage said he believed Dracula was afraid to face God and atone for his actions, and so he sought alternative methods of eternal life that would avoid the judgment of his Creator. Accompanying these different motives is a range of depictions of the Count, some that honor the source material and others that deviate in making Dracula an empathetic villain. Most of them end with his death but few retain the powerful impact of the novel’s conclusion.

Having hunted down the vampire and dispatched him just as the sun rises, Jonathan and the others see not a look of fear or anger on his face, but one of peace as he disintegrates into dust, an implication that his inner torment has come to an end and he has been liberated from darkness. It is not much different from the look of saintly innocence restored to Lucy when her soul is at peace, an implication that not even Dracula is immune to the power of redemption. It is a theme that carries into modern literature and variations on vampires, which feature a host of immortals attempting to atone for their fallen state. From the tormented souls in Anne Rice’s Vampire Chronicles to the hero of Moonlight, the beautiful, tormented immortals are haunted by questions of mortality and their separation from God. Some are even on an eternal quest for forgiveness and salvation.

Bram Stoker created more than a character audiences would never forget, but comprehension of an evil so profound it is still reflected in Gothic fiction and film over a century later. Dracula serves to remind us not only of our own mortality and the potential consequences of an eternity of chosen separation from God, but that evil comes in the most beguiling form. Whether depicted as a monster or a romantic anti-hero, in the end it is always faith that defeats him and leaves the audience with much to ponder. ♦

Originally published in the Costume Chronicles.

15 thoughts on “Blood is Life: The Immortal Lessons in Dracula”