Did anyone else watch The Abominable Bride? I had so much fun with it, I was cracking up hours later over dinner, talking about completely unrelated things. My family has not seen me that high since I ate an entire carton of ice cream by myself.

Victorian Holmes: I have been dying to see Benedict in an “official” representation of Holmes since forever, and he did not disappoint. He was so lovely in his top hat and tweeds, smoking his pipe and dashing about in his caped coat, that I’d gladly trade in the modern series for a purely costume drama experience. They got the atmosphere perfect… ghostly, fog-filled streets, dank underground morgues, high hedgerows and bustles. The mustache on Watson was terrible but oh, well. It wasn’t nearly as bad as the sideburns on Lestrade. Uuugh!

Winks, Nudges, and Nods to the Canon: I started laughing right around, “I had to grow this mustache just so people would recognize me!” and did not stop until the end. Does the Strand artist follow you around sketching you during the crimes? Nice of them to throw in the five orange pips. It also borrows from other, lesser known, Holmes productions… hilariously, the super awkward conversation in the potting shed about whether Holmes has had any “experiences” with women is ripped out of The Private Life of Sherlock Holmes. (A movie I should not find amusing, but I do, and subsequently, a film that has greatly influenced a lot of their decisions on Sherlock, including the brother dynamic.) 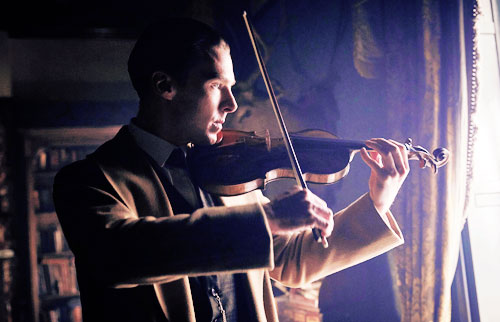 The Misogyny and Sexism: Oh, gosh, taking pokes at Victorian male arrogance just makes my day. I about spit out my drink when Mary complained about being left behind again, and Watson said she didn’t have to be entirely useless because “We’ll be hungry later.” Right, so I’ll just go cook something, shall I? Mrs. Hudson is angry that in the stories she only serves tea and never talks. Molly Hooper is dressing as a man and berating male coworkers to “get ahead in a man’s world.” Then, of course, we find out that Mary is a spy for Mycroft and five steps ahead of them the entire way, and the initial mystery is women attempting to make their deaths matter in a male-dominated society where men “get away with” whatever they please.

Mycroft: I will never look at him the same way again. Only Gatiss would agree to put on a fat suit and be utterly humiliated as a fat, arrogant slob knee-deep in plumb pudding… a man so arrogant and callous that he’d eat himself to death just to show up his little brother. Then we find out (thank God) that this is all in Sherlock’s head, in his Mind Palace / Lucid Dreaming / Drug-Induced Acid Trip… and we get yet another opportunity to see how different Sherlock’s perception of his brother is from the genuine reality. And honestly, that’s one of the things that keeps me coming back to this series.

I could care less about most of the mysteries; it’s the dynamic between the Holmes brothers that has me hooked. Sherlock sincerely believes Mycroft does not care, when it is shockingly apparent to everyone else that he does. The scene where Sherlock tore up his list of what drugs he’d taken and chucked it, only to have Mycroft tenderly pick up the pieces and place them in his journal (coincidentally, where a note of “Redbeard” is scrawled… does it mean something more than a dog, or is Mycroft punishing himself with a constant reminder of what first sent Sherlock over the edge – his own bitter truths about the world?) is powerful, and evocative of their entire relationship. Sherlock goes off recklessly, destroying his life and other lives in his wake, and Mycroft is always there to pick up the pieces. (I hope this is not foreshadowing of Mycroft’s death. I can’t handle that.)

What This Reveals: Perhaps the most powerful element of this episode is in what it reveals to us about Sherlock’s perceptions. Each character plays a role as he imagines it, which reflects his deep inner sense of who they are… and that leaves us some clues to unravel. What does his perception of Molly tell us? That she over-compensates to compete with men? That he is subconsciously aware of her, but does not see her specifically as a woman? Irene is still nagging at his subconscious, the blue-winged fly in the ointment of his mind, though it genuinely shocked me that we never saw her. More interestingly, I think it sheds insight on Mary. He has her specifically working for Mycroft behind their backs as a spy. Is that what he thinks is going on? IS IT what is going on? There is so much nuance there to explore, I think it’ll take another few re-watches to digest it all.

Moriarty: Oh, you need to stop crawling around in Sherlock’s head. I loved his scenes in Baker Street and at the Falls. I especially loved it that Watson kicked him over the edge, after getting annoyed, and that Watson figured out he’s a character in a story. (“I’ve written enough stories to know when I’m in one!”) That being said, I’m bored with Moriarty. Let’s move on from him.

The Acid Trip: I was honestly disappointed to be yanked out of the Victorian narrative halfway through and discover it was all a dream / inside Sherlock’s head. I’m still not sure I liked that. I think it was a brilliant twist, and how they handled it after that was nicely done, but it turned the narration into a bit of a mess. The ghost story suddenly became less important, since it was all an allegory for Sherlock trying to deduce how Moriarty could shoot himself in the head and come back for round two. It explained some of the modern elements creeping into the Victorian world (I laughed out loud when Sherlock heard modern John berate him as a “pompous prick” and then Victorian Watson demanded, “the truth about my wife!”), but I would have rather enjoyed a straight up Victorian ghost story, rather than having it all be a symbolic allegory. However… if that’s what Sherlock’s mind palace is like… damn, I want to LIVE THERE.

The Plot: These stories are always clever, but something about most of them remains unsatisfying. I’m not sure what it is, but it feels like the scripts are more concerned with twists and turns and cleverness than resolutions tied to logical reasoning. In the end, this isn’t a mystery so much as a dark and funny frolic through Sherlock’s mind palace. There’s nothing wrong with that, but next season, I want something new, something that doesn’t involve Moriarty.

Waiting another year or more for further episodes will be torture, but I’ll laugh my head off at this another dozen times in the meantime.

9 thoughts on “Sherlock: A Man Out Of Time”