Don’t read on unless you’ve seen the film, or don’t care about spoilers. I can’t discuss these themes without revealing the major “shock” moment.

One theme often repeated in art has Rebellion by the Son against the Father, with the Son inevitably murdering the Father. Because the Son would not exist without a Father, this places the Father in the shoes of the Creator. Pagan mythology is full of demigods rebelling against their creator/father, often who abandoned them on earth with no awareness of their true purpose. Christianity explores this symbolism in the myth of the Archangel Lucifer’s rebellion against his Creator.

It is a story told in different ways, in different mythologies, in different cultures throughout the world. Smallville, Harry Potter, and many other modern arts have a child murder a parent to mark a crossover into the Dark Side. It is easy to understand why this particular act is irredeemable; to destroy your Creator marks how much revulsion you have for your own existence. The origins of this particular mythology reveal not only the culture’s moral standards but its deep inner feelings toward the Creator. It explores the expectations for parental roles (Fathers should love us and care, not abandon us) and ethics (it is morally wrong to murder your father/Creator). It taps into humanity’s perception of its Creator, and of God/gods themselves, as figures that “birth” Man, then either abandon or torment them.

In the eyes of the rebellious Son, the Father is inadequate and must die, so the Son is no longer under the shadow of the Creator. Yet, severing these ties through murder does not prevent the Son from being the creation of their Father. Lex Luthor is still a Luthor. Tom Riddle is still a Riddle. And Ben Solo is still a Solo. He can change his name and chase after the dream of becoming his grandfather, but he is still Han’s son… and as such, he is not beyond redemption. This act that marks others in mythology as truly lost is not true in his case; the Light is still “seducing him.” He has to turn to the Sith Lord for darkness, because he does not possess enough of his own to be entirely evil. Instead of a “good guy” falling into evil, we have a villain who wants to be evil and has to destroy the good in himself first. Ben is not fighting his own demons but fighting the angels.

Something that struck me, profoundly, while watching the film and realizing the struggle was not against evil but in resistance to the Light, was the realization that Christians often put too much emphasis on the Dark Side in their own lives and our culture. Some Churches cultivate a culture of fear within the Body—of hell, of being lost, of angering God, of wandering into sin, of being seduced away from the Light. It is spreading salvation and reinforcing goodness through fear of punishment, not devotion to a higher calling. The emphasis becomes not the Light itself, but the Dark Side. Instead, our focus should be on the Light… on hearing its call, on giving oneself over to it, in asking ourselves in what areas are we, like Ben, trying to fight it? 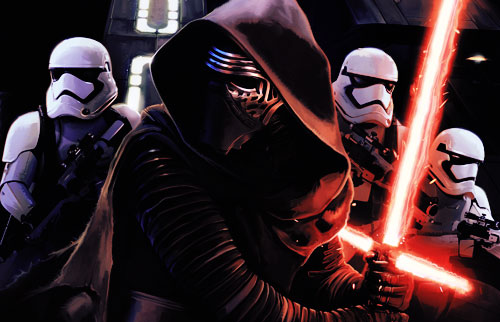 Modern culture is, in a sense, immersed in the Force; but the Dark Side is not as great of a threat as the Light Side is effective in whispering to us all, constantly, believers or non. All goodness and mercy comes from God. It’s like C.S. Lewis writes in the final Narnia book, when Aslan informs a young man, “Whatever good you did in [the false god] Tash’s name, you did for me.”

It is the Light Side of the Force that stopped Ben from killing Finn on the battlefield after sensing his heart was not aligned with the Storm Troopers (he stopped, he sensed, he walked on). It is the Light that makes Ben struggle so much with effortless evil. Light that causes him to destroy consoles in his tantrums rather than kill people. Light that made him try to scare Rey into revealing information before mind-raping her. Light that tried to stay his hand in killing his father (that he only did it when the light of the sun faded is significant). Light that made him ask Rey to join him, to become his apprentice, rather than killing her outright before she used the Force to gain the upper hand in their duel. Ben’s story is not done yet. He is not beyond redemption. He is not wholly with the Dark Side. There is still hope.

Look not for the Dark Side, nor to fear, which leads to an erroneous view of God; look for the Light.

15 thoughts on “Star Wars: Tempted by Darkness… or Light?”